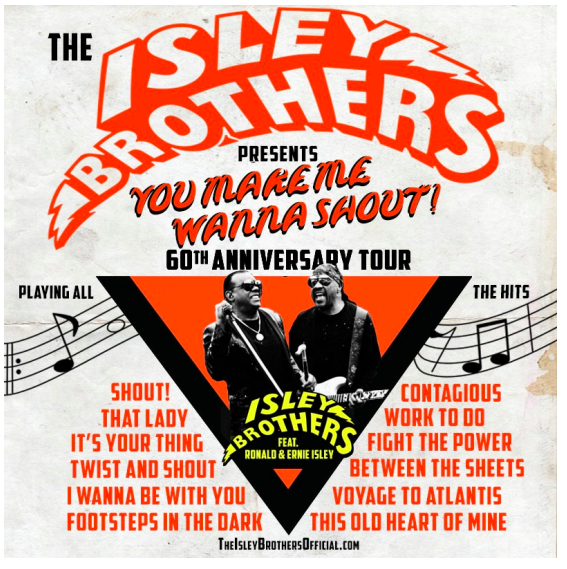 The Isley Brothers Boogie Towards St. Pete this December

By Lisa WilliamsNovember 21, 2019Press
No Comments

St. Petersburg, FLA (November 21, 2019) – The Isley Brothers will be making a special appearance in St. Petersburg, Florida for their tour across the U.S. in celebration of their 60th year anniversary. This brother duo will be performing at the Duke Energy Center for the Arts – Mahaffey Theater on Thursday, December 19th at 7:30pm.

Tickets range from $55 – $95 and can be purchased online at www.TheMahaffey.com, by phone (727) 300-2000, or at the Box Office located at 400 1st St. South Downtown St. Pete. The Box Office is open 11am – 5pm Monday through Saturday. VIP Packages are also available for this performance.

“This tour is dedicated to all of our fans around the world! I love you all and could not have done this without your constant love and support for our music and the Isley Family! Thank you” – Ron Isley.

The Isley Brothers will be celebrating the 60th anniversary of their hit song “Shout.” Released on September 21, 1959, “Shout” became the brothers’ first gold single and went on to become a frequently covered classic. Fans will not only be able to hear the song live, but they will hear a number of the brothers’ biggest hits including “It’s Your Thing,” “That Lady,” “Twist and Shout,” and more. The “You Make Me Wanna Shout – 60th Anniversary” tour kicks off on July 6 in Tuolumne, CA and will take the brothers across the country hitting Biloxi, Wilmington, Reno, San Francisco, and more. Ten additional dates have been added to the schedule which means they’ll be even busier this summer and will stay on the road through the fall. New dates include stops in Atlanta, Atlantic City, Albuquerque, and Los Angeles where they’ll play the famed Greek Theatre on August 24. The Isley Brothers will be offering various VIP ticket packages including front row, meet & greet, and limited edition merchandise.