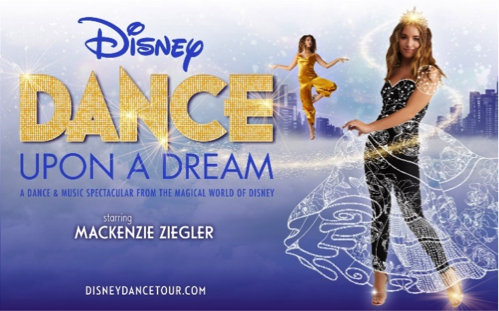 By Lisa WilliamsNovember 18, 2019Uncategorized
No Comments

Beauty and the Beast, Moana and Cinderella

St. Petersburg, FLA (November 18, 2019) – The all-new Disney Dance Upon a Dream (www.DisneyDanceTour.com), starring singer, actress and dancer Mackenzie Ziegler will appear in St. Petersburg at the Duke Energy Center for the Arts – Mahaffey Theater on Thursday, March 5 at 7:30pm.  The show takes the cast on an electrifying journey to find their own beat in a fast-moving world that features a soundtrack of Disney’s greatest hits remixed and reimagined. The original story unfolds around a present-day heroine and steps into the magical world of Disney that includes video and music from the most beloved films, including Beauty and the Beast, Moana and Cinderella.

Tickets range from $45 – $75 and can be purchased online at www.TheMahaffey.com, by phone (727) 300-2000, or at the Box Office located at 400 1st St. South Downtown St. Pete. The Box Office is open 11am – 5pm Monday through Saturday. Premium VIP seats are $150 and Preferred Seating tickets are $100.  For more information, visit www.TheMahaffey.com or www.DisneyDanceTour.com.

“I am so excited to join the Disney family and create a new show that is driven by my passion for dance and music,” says Mackenzie Ziegler. “I grew up loving all things Disney, so the opportunity to tell an inspiring story through dance and the greatest Disney music of all time is a dream come true. The show will be everything magical we love about Disney, with a modern dance twist that you have to come and see live. I can’t wait!”

At just 15 years old, Mackenzie Ziegler has become one of the most influential rising stars of Generation Z. She has made a splash in the entertainment industry garnering a massive social media presence of over 30 million followers across several platforms, and her music videos have collectively received over 200 million views. In August 2019, she was nominated for a Teen Choice Award in the category of “Choice Fashion/Beauty Web Star,” and the previous year she won a Teen Choice Award for “Choice Muser.”

As a singer, songwriter and recording artist, Mackenzie released her latest single “HOT” in July 2019. The single was her first release with Arista Records and showcased her growth as a rising artist. The new single came shortly after the launch of PRETTYMUCH’S Summer North American FOMO Tour, where she opened for the boy band throughout shows across the country.

In November 2018, Mackenzie released her album Phases, which featured the singles “Nothing on Us” and “Wonderful,” written by Grammy-nominated songwriters Sia and Jesse Shatkin. Prior to Phases, she released the single “Monsters (aka Haters)” and followed this success with her singles: “Teamwork,” “Breathe” and “What If.”

Mackenzie can currently be seen starring in the YouTube series “Total Eclipse” for the digital network Brat, on which she also serves as Executive Producer, and in the upcoming animated film “Ice Princess Lily” for DIRECTV. Last fall, Mackenzie competed on ABC’s “Dancing with the Stars: Juniors,” and will next be seen in the sci-fi film “Let Us In.”

The show is created and directed by Amy Tinkham, who started her career as a professional dancer before moving into choreography for artists including Madonna and The Dixie Chicks.  Most recently Tinkham was the creative director for Aerosmith’s Las Vegas residency show “Deuces Are Wild” and James Taylor’s 2017/2018 national tour. Guy Phillips is partnering with Right Angle Entertainment to produce Disney Dance Upon a Dream, and first worked together with Tinkham as producer of the “Dancing with the Stars” live tour.

At each performance a limited amount of Premium VIP seats will be available that take ticketholders behind-the-scenes for an exclusive post-show Meet & Greet experience with Mackenzie Ziegler. Also included is guaranteed front of the audience seating, a one-on-one photo opportunity with Ziegler, and an exclusive autographed VIP lanyard. A limited amount of Preferred Seating is also offered for some of the best seats in the house.

Disney Concerts is the concert production and licensing division of Disney Music Group, the music arm of The Walt Disney Company.  Disney Concerts produces concerts and tours, and licenses Disney music and visual content to symphony orchestras and presenters on a worldwide basis.  Disney Concerts’ concert packages include a variety of formats, such as “live to picture” film concerts and themed instrumental and vocal compilation concerts, and range from instrumental-only symphonic performances to multimedia productions featuring live vocalists and choir.  Current titles include the Star Wars Film Concert Series (Episodes IV-VII), Beauty and the Beast, The Little Mermaid, Fantasia, Pixar In Concert, The Nightmare Before Christmas, Alice In Wonderland, Frozen, Ratatouille, The Pirates of the Caribbean series (Episodes I-IV), and Silly Symphonies, which last year collectively accounted for over 575 performances in many of the world’s top concert venues, including Lincoln Center, Royal Albert Hall, Sydney Opera House, Tokyo Forum and the Hollywood Bowl. Numerous new concert packages and touring productions from Disney’s portfolio of studios, including Disney’s feature animation and live action studios, Pixar, Lucasfilm and Marvel, are currently in development.