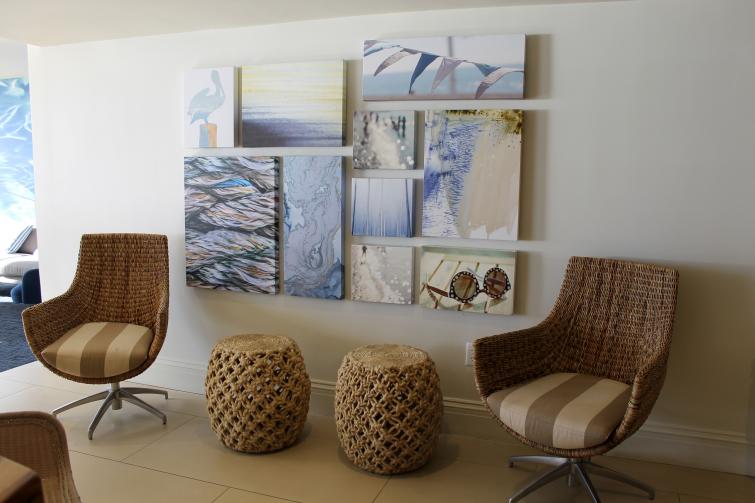 To read the full article, https://www.boutiquedesign.com/news/godfrey-flag-flies-tampa

Oxford Hotels & Resorts LLC’s upscale Godfrey brand has made its debut in southwest Florida. The former Bay Harbor Hotel & Conference Center in Tampa Bay has been reborn as The Godfrey Hotel & Cabanas Tampa, following a multimillion dollar renovation that began in October 2015.

Oxford’s principals collaborated with The Gettys Group on the update. Inspired by the sunset and bay, the Oxford-Gettys team incorporated soft, neutral tones throughout. The hotel’s new design also features lounge seating, fireplaces, cabanas and a soft-blue façade.

The Godfrey’s lobby now features a social table that doubles as a communal workstation with electrical outlets, a lounge and a new lobby-level café and wine bar. The space showcases relaxed furnishings, Italian tile and nautical accents.

The 3,200 sq.-ft. pier at the Godfrey Tampa. Photo: Courtesy of The Godfrey Hotel & Cabanas Tampa

The hotel’s newly redesigned outdoor spaces include a heated pool, with a second pool to open in the spring, a beachfront, and a 3,200-sq.-ft. renovated pier. The Godfrey also offers waterfront dining at Beach Bar|Restaurant, a resort-style restaurant featuring casual beach fare.

“We were initially drawn to the irreplaceable waterfront real estate with its beautiful views and sunsets,” says John Rutledge, founder, president, and chief executive officer of Oxford Hotels & Resorts LLC and its parent company Oxford Capital Group LLC. “We consider Tampa Bay and the greater Tampa Bay area to be one of the most dynamically growing areas in the country, thus, we felt this was a perfect choice for our first southern Godfrey. The Oxford team is excited to bring our vision to life with this distinctive lifestyle property, fully embracing the unique character of Tampa Bay.”

The Tampa hotel becomes the fourth Godfrey locale. The others are its flagship in Chicago, which opened in 2014 and was followed two years later by another property in Boston, and The Godfrey Hollywood, which is scheduled to open in 2019.